About the Adams Alumni Center

The Center’s professional, dedicated team members believe world-class hospitality enriches the Jayhawk experience. We deliver outstanding service and modern amenities in an unrivaled, distinctively classic setting. Our reasonable, all-inclusive rates for weddings will eliminate the stress of planning, so you can focus on the fun.

Let us help you make memories to last a lifetime. Call and schedule a visit with our team. 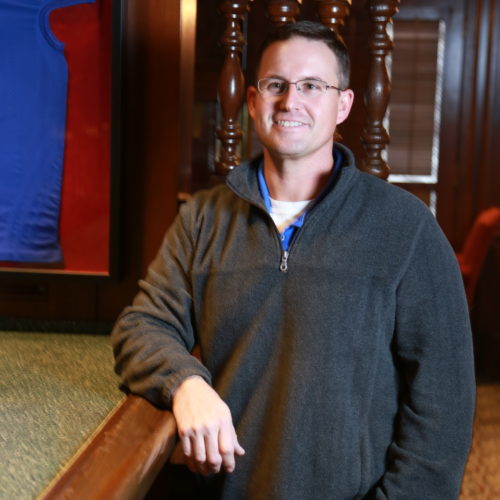 Ben is here to ensure you and your guests have a comfortable and safe experience. Ben oversees building systems including mechanical, electrical, fire/life safety, elevators and other general maintenance of the building and grounds. Ben will also assist with any AV, banners, or other requests before your special day.

“There could not have been a more perfect venue to celebrate our wedding anniversary. The Alumni Center has always been one of the jewels of KU!” — Paul D. 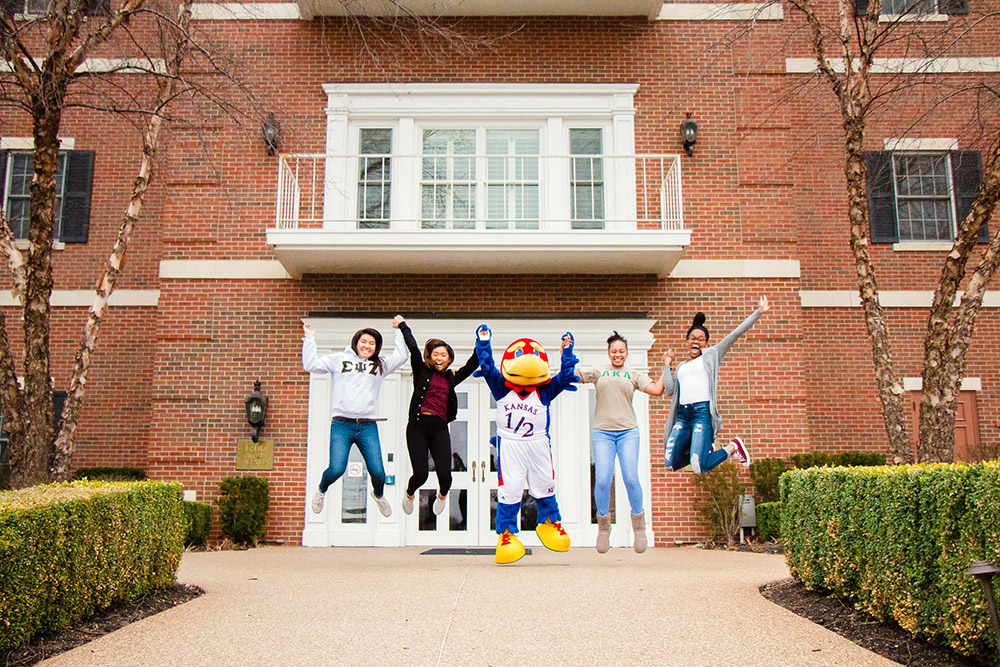 A place of their own

From Room 3 of Fraser Hall, a three-room suite in Strong Hall, the Sudler House, and the main floor of the Union, the KU Alumni Association finally found its home on the Hill. Formerly where the Alpha Chi Omega house once stood, the land at the corner of Oread Avenue and 13th Street was purchased to build a space for Jayhawks past and present.

In the words of Association President Dick Wintermote, c’51, the Alumni Association’s Planning and Building Committee sought to create “one of the most unique alumni centers on any campus in the nation – one that will house services for the entire University family instead of being just an office building for the Alumni Association.”  The result was the Adams Alumni Center.

Although Wintermote led the efforts to create the building, he would never occupy the President’s office. He instead chose for the building to be his legacy and retired right before the Center was completed.

The building is dedicated to Kenneth Stanley “Boots” Adams. As a child, Adams wore his favorite pair of tiny black boots everywhere – including to bed. The nickname stuck until his death, and many did not even know what his real name was.

While Adams never graduated from the University of Kansas, he remains one of the most influential Jayhawks. He left before the start of his senior year to work and earn enough money to finish, but never made it back. Instead, he rose through the ranks of Phillips Petroleum Co. from warehouse clerk to CEO. Adams proved himself as not only a successful businessman, but also a widely-admired leader who trusted his employees to make good decisions.

After almost 100 years without a permanent home, a symbolic groundbreaking for the Adams Alumni Center took place in 1981 during the halftime of the Kansas vs. Missouri football game.

In 1983, the KU Alumni Association marked its centennial by dedicating the K.S. “Boots” Adams Alumni Center as a home for all Jayhawks, conveniently located atop Mount Oread at the entrance to historic Jayhawk Boulevard.

In addition to housing the offices of the Alumni Association staff, the Adams Alumni Center offers elegant, inviting space for alumni, students, faculty and staff to gather for meetings, University events and celebrations with family and friends.

“The K.S. ‘Boots’ Adams Alumni Center will, indeed, be a special place for KU’s alumni. Like all great buildings, it stands as a testament to many things. It stands in memory of the integrity and loyalty of the man whose name it bears. It stands as a tribute to the many alumni throughout the state and nation of who worked to make the dream a reality. And it stands as a lasting symbol of the generosity of the family of Boots Adams.” – Kansas Alumni Magazine, June 1983

Let us know what you’re thinking for your special day. We’ll get back to you right away!