This article originally appeared in Kansas Alumni magazine, Vol. 64, No. 4, Dec. 1965-Jan. 1966. The magazine was published nine times per year, monthly except for combined issues of December/January, March/April, and July/August. Dick Wintermote, c’51, served as executive secretary-editor. At the time, membership in the Alumni Association was $6 per year, and a Life membership was $100. The above photo of McCollum Hall under construction was published in Kansas Alumni magazine, November 1964.

If a full moon was shining brightly in a clear sky, the thrifty city fathers of turn-of-the-century Lawrence considered burning the gas street lamps a waste of fuel. But if the night was dark, a couple of KU students set out on their rounds lighting the lamps.

When the lamps were lit, the young men got some sleep; at midnight, they were up again, retracing their steps to turn off the lights.

Then one of the pair would head for the offices of the Lawrence World, where he earned more money for his college expenses by counting out newspapers for the delivery boys and then covering a route himself. Sometimes he could get a little more sleep by curling up on a stack of old newspapers in a storeroom at the printing shop while he waited for the papers to come off the press.

But the pace was tough, and often the young man fell asleep in his classes. He always felt that his having to work so much in order to meet expenses cheated him out of much of his education.

So it was that years later, he—Elmer McCollum, c’03, g’04—started a student loan fund with money awarded to him in honor of his great contributions to the study of nutrition—a fund Dr. McCollum has added to over the years.

“Self-financing,” he says, “has always meant too much physical work and too much loss of sleep to the detriment of education. That is the reason why I wanted, and still want, to provide an opportunity for a few young people in order to spare them the waste of time, strength, and rest by making it possible for them to pay for their education after their earning capacity is more favorable.”

Throughout his life, Dr. McCollum has shown the passion for learning that drove the young student lamplighter. He also has shown a compassion for those who learn—not only as a philanthropist, but also as a teacher, counselor, and friend.

So it was characteristic that when he learned the Kansas Board of Regents had decided to name the University’s newest and largest residence hall in honor of him and his brother, the late Burton McCollum, e’03, Dr. McCollum interpreted the news in terms of his love for learning and those who learn.

“Nothing could honor us more,” he said, “than that a few young men, armed with intelligence and insight, guided by a narrow and positive purpose, and with a meditative element in their minds, might think constructively in the shelter of McCollum Hall.”

“Nothing could honor us more than that a few young men, armed with intelligence and insight, guided by a narrow and positive purpose, and with a meditative element in their minds, might think constructively in the shelter of McCollum Hall.” —Dr. Elmer McCollum, c'03, g'04

And when he came back to Mount Oread for the dedication of McCollum Hall in October, Dr. McCollum saw the building and its inhabitants less as a residence hall filled with 1,100 high-spirited young men than as an academic building filled with students.

“The organization of the men on individual floors of McCollum and their objectives of broadening horizons through sharing ideas, cultivating character, and discussion of important problems and issues significant for the future of mankind arouses my admiration,” he commented.

Of course, neither Dr. McCollum nor anyone else pictures the men of McCollum as always plugging away doggedly at their homework or huddling in earnest discussion of weighty world problems. The hall’s biweekly newspaper, The Tartan (which one of its editors has described as “the Kansan’s biggest little brother), evinces the healthy, if somewhat more frivolous, interests of young males in things other than academic pursuits.

The paper’s “flag,” for instance, is adorned with a sketch of a shapely young lady in form-fitting blouse, skater’s length skirt, and knee sox. A regular feature treats the reader to a series of cheesecake photos of a campus beauty (photos decorous enough they would cause not a trace of consternation in the dean of women’s office). And another feature indulges in lighthearted nonsense in a style reminiscent of Max Shulman’s Barefoot Boy With Cheek.

Nevertheless, the men of McCollum have done a remarkable job of organizing their hall in ways calculated to minimize the potential impersonality of its bigness on one hand, and on the other hand to take advantage of the diversity its bigness offers. 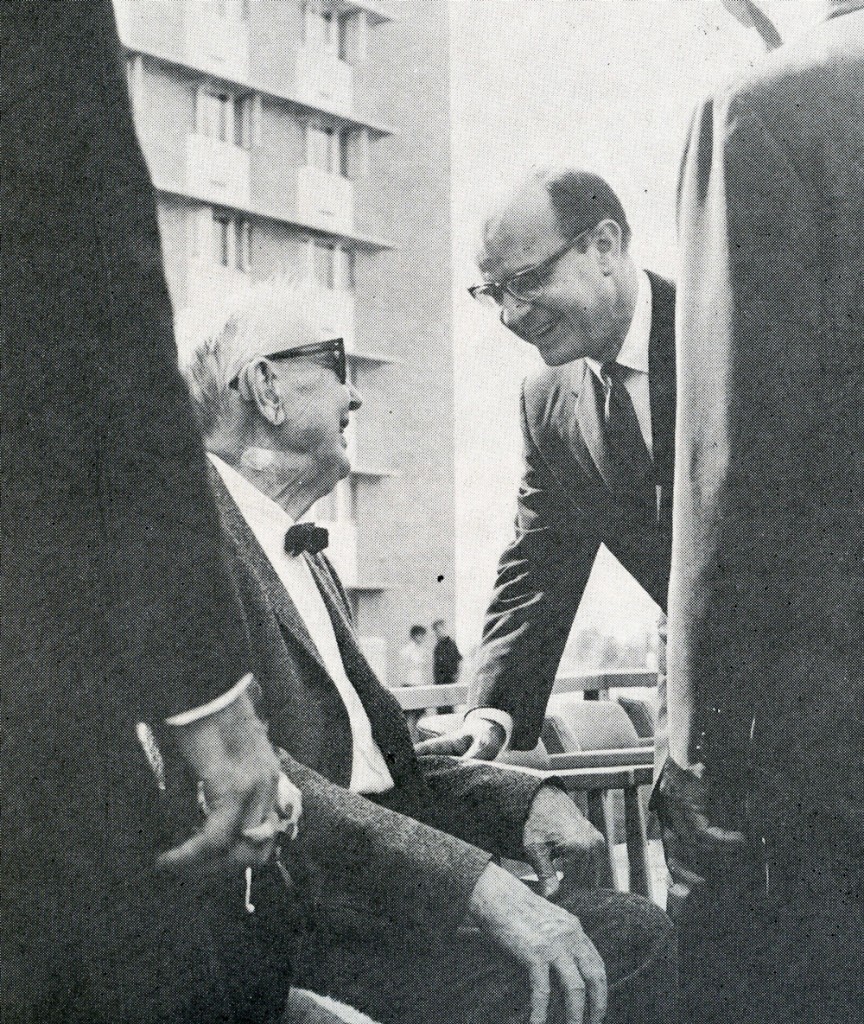 Working from the committee’s plans, the men of Ellsworth wrote and ratified a new constitution for McCollum and elected a full list of officers. To the new officers fell the job of working with the University administration to plan for the dedication of the new hall and for the activities which would acquaint the hall’s residents with their new home and build the feeling of a well-knit living group.

When McCollum’s doors were opened in September, the officers were ready with an orientation program and a full schedule of social activities and other events  designed to make the men feel at home and to encourage them to take part in the hall’s programs.

The planning groups already had done a great deal to determine the atmosphere of the new residence hall. In addition to making plans for the government and for the fall activities, they had begun to work on the “image” of McCollum. The Scottish ancestry of the McCollum brothers, as well as the “highland” site of the hall, gave a natural framework for the image.

With the help of experts on Scottish heraldry, hall officers found the crest and tartan of the McCollum clan and adopted them as official symbols of the “clan” living in McCollum Hall. The hall’s paper was named The Tartan (and its pinup section was called “McCollum’s Lass”). And although the young men of the hall have not yet taken to wearing kilts, there is evidence that they are adopting the fierce loyalty and pride of a Highland clan.

The men take a more personal pride in the distinction given to the name McCollum by the two brothers after whom the hall is named: Elmer McCollum, discoverer of vitamins A and D, pioneer in the discovery of the nutritional importance of the B complex vitamins and the trace elements, the man who has undoubtedly done more than any other to change man’s eating habits; and Burton McCollum, dedicated earth scientist who first developed seismographic methods for oil exploration and invented and patented more than 30 devices for geological exploration.

The McCollum brothers are probably the most outstanding men ever graduated from KU, and undoubtedly the most outstanding pair of brothers. Though a university residence hall cannot hope to achieve a comparable distinction and few if any of the hall’s residents can look forward to such distinguished careers, the hall’s leaders are determined that McCollum will do credit to the name it honors.

“We who have met and talked with Dr. and Mrs. McCollum feel even more deeply the pride and significance of the name we bear,” said hall resident Bill Robinson, vice-president of the student body, after the dedication of McCollum Hall.

Elmer McCollum and the hall leaders at least share one hope for the hall: that the experience of living there will be a strong character-building force for the men of McCollum. 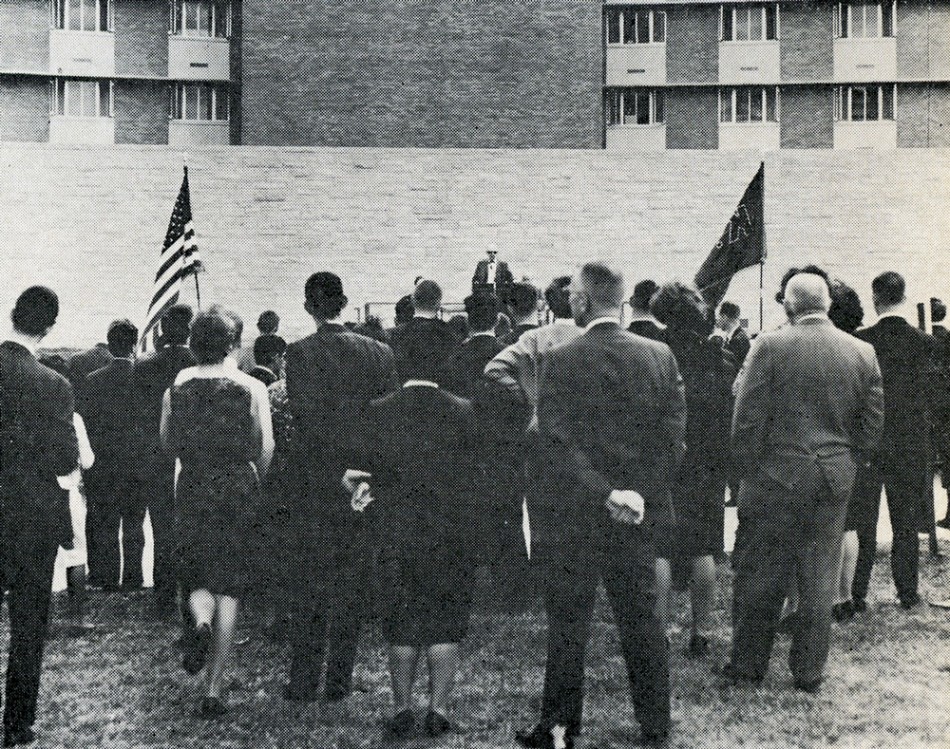 Members of a standing-room-only crowd listen to Dr. McCollum as he speaks from the platform set up in front of McCollum Hall. Published in Kansas Alumni magazine, Dec. 1965-Jan. 1966. 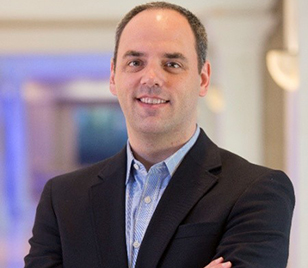 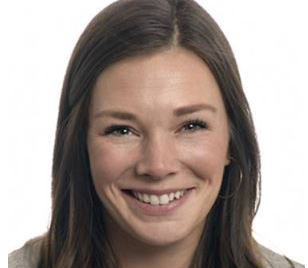 July 20, 2022
In partnership with SumnerOne, KU Alumni is talking with leaders in their industry.
Read More 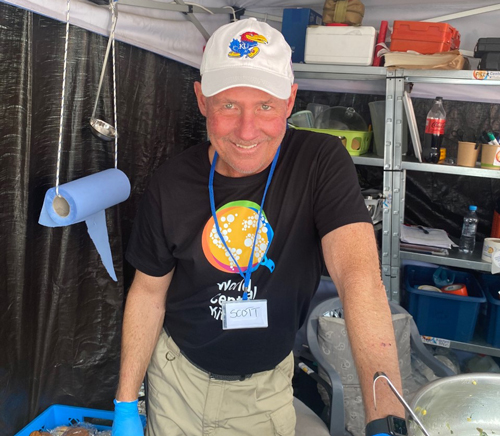 June 20, 2022
During the ongoing humanitarian crisis in Ukraine, one Jayhawk was able to make the long trip to lend a hand.
Read More