When Kansas National Guard officer and Department of Defense contractor Lee Girard returned from his last overseas deployment in 2018, he and a few co-workers at Fort Leavenworth saw advertisements for an upcoming 5K road race and agreed to sign up together.

Those plans fell through, unfortunately, and Girard, b’90, g’93, was still itching to find a road race to help motivate his personal and professional fitness goals; that’s when he noticed promotions for the Alumni Association’s 2019 Veterans Day 5K and mentioned it to his son, Garrett, then a KU ROTC student.

“He said, ‘Yeah, let’s do it,’” Girard recalls from his Lawrence home. “So, he and I ran it together that year.” 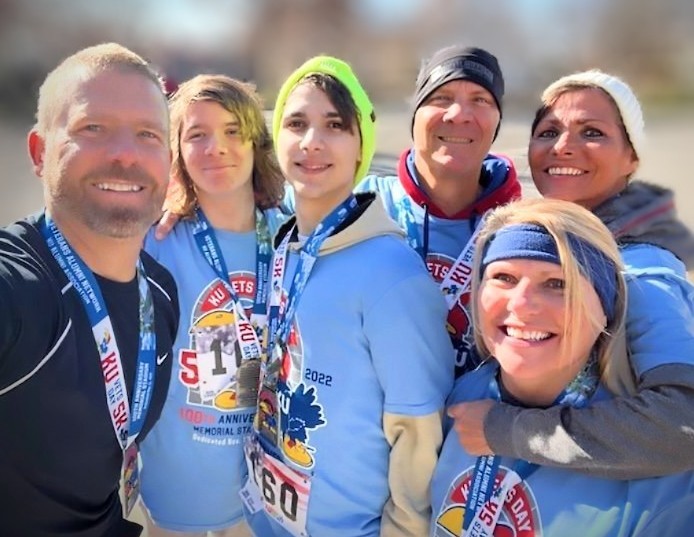 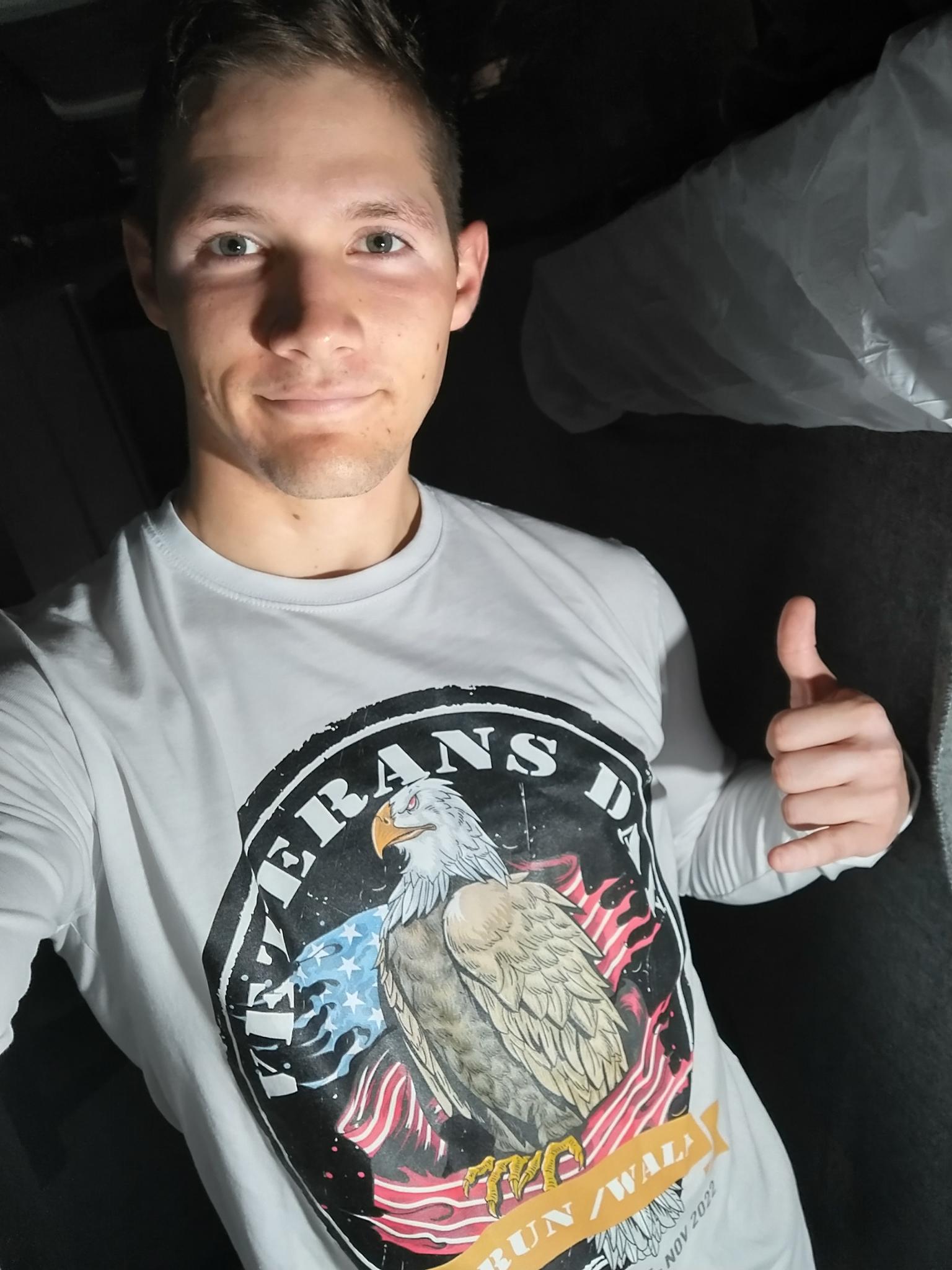 After the COVID break of 2020, Lee and Garrett in 2021 were joined by the Girards’ youngest child, Freya, then a Lawrence High School freshman and cross country runner. As this year’s Vets Day 5K approached, Girard mentioned it during a family dinner with his in-laws, Jeff and Dianna Carlson, of Olathe. Both were quick to take up the challenge, Girard says, “and it just kind of grew from there.”

Garrett, c’18—now an officer in the Kansas National Guard like his father—participated virtually while on deployment in the Middle East. The Girards’ oldest son, Robert, c’16, and his wife, Alyssa Denneler Girard, c’16, joined in virtually from Bloomington, Indiana. The Girards’ son Hunter, a KU freshman, signed up, as did Debbie Girard, who chose to affiliate with the event’s merry band of 5K walkers rather than be relegated once again to camera duty.

In all, the extended Girard clan signed up 10 family members for the 2022 Vets Day 5K, which on Nov. 13 attracted a record 669 participants—including 219 who joined virtually—from 28 states, Washington, D.C., and nine countries. All proceeds from the event support the Lt. Gen. William K. Jones Military-Affiliated Student Center, KU Veterans Alumni Network and the KU Student Veterans of America chapter.

The day is even more of a celebration for the Girard family because it’s also Lee’s birthday, yet he concedes that while actually running the challenging course—up Mississippi Street and Memorial Drive, down Jayhawk Boulevard and Sunflower Road to Sunnyside Avenue, back up 15th Street, around the Chi Omega Fountain and finally circling back to the stadium down 11th Street—he isn’t thinking about his birthday, his family, veterans with whom he served, or even the solemnity of the occasion. 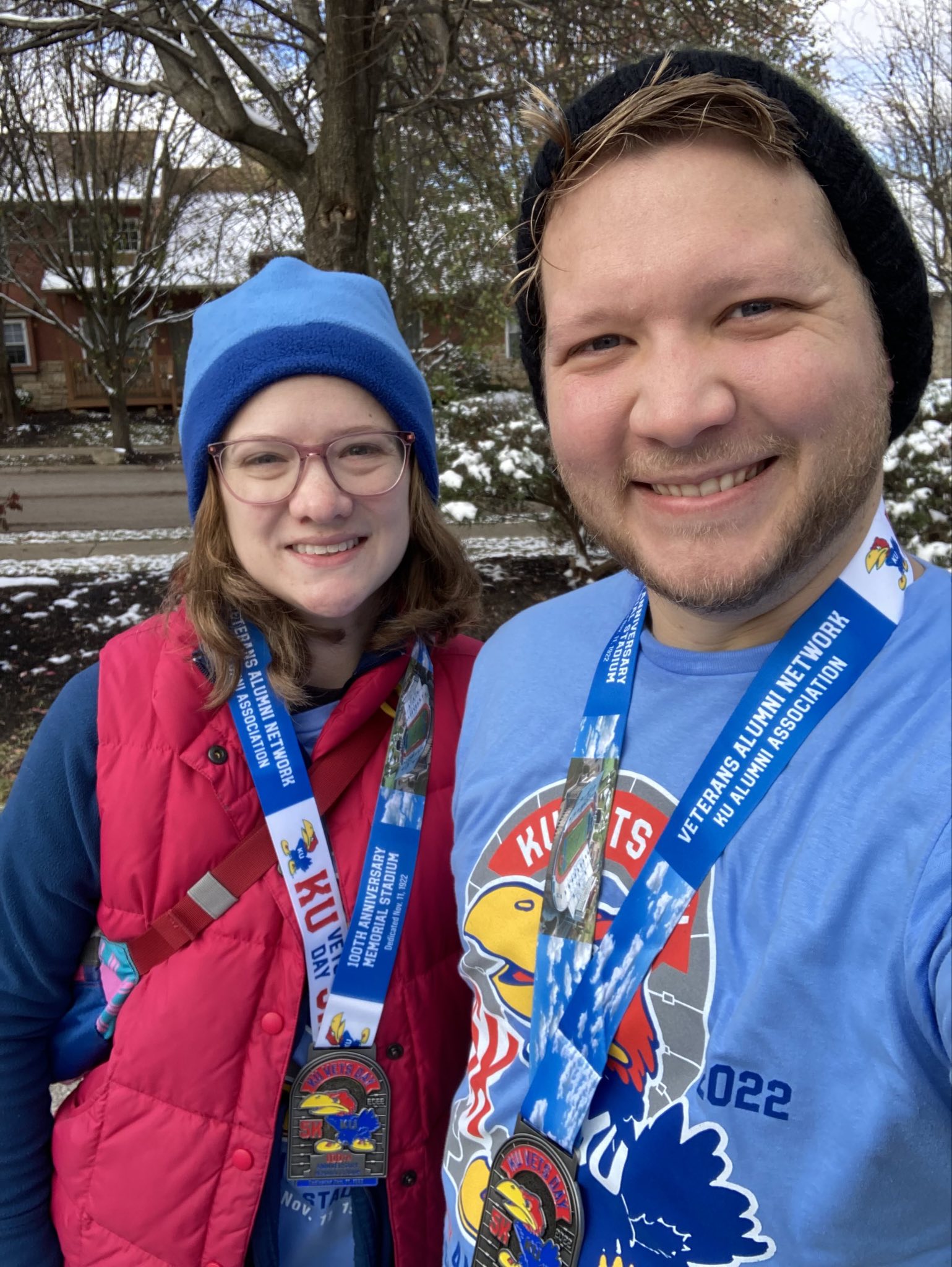 “Whenever I’m running a 5K, that’s all I can focus on, especially on that course. That uphill seems like forever,” Girard says with a laugh. “There’s no time to be thinking about other stuff. I’m concentrating on what I’m doing, which is trying to stay alive. I just turned 57. It’s not getting any easier.

And what about when he’s 58? Will he still be willing to challenge that long, winding uphill from the stadium to Jayhawk Boulevard next year?

“We’ll be there,” he replies firmly. “And Garrett will be back off deployment, so he’ll be geared up to do it in person.”

Our Jayhawks Give Back program, presented by Andrew Wymore, Realtor, celebrates ’Hawks who are making a difference in ways big and small. Each quarter, we’ll feature a member of the KU family and their story. If you know a Jayhawk who should be featured in Jayhawks Give Back, let us know! 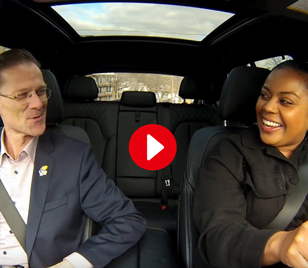 January 25, 2023
We're taking the best of KU on a ride through campus as we talk about their Jayhawk experience.
Read More 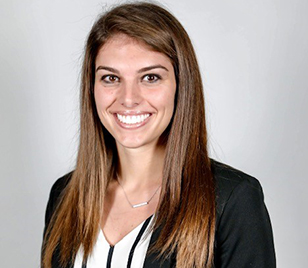 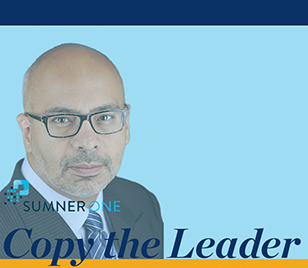 January 18, 2023
In partnership with SumnerOne, KU Alumni is talking with leaders in their industry.
Read More